We are TerraCrux Games, your analog solution to a digital world. Located in downtown Tacoma Washington, we strive to make available great products and a great community that centers around the joy of playing games with each other just to have fun!

We specialize in board games, card games, role playing games, and tabletop miniature games and are also a hub of casual play, tournaments, and other organized events. We love gaming and want to share that with all of you, so check out our online store or come on down and always keep on gaming! 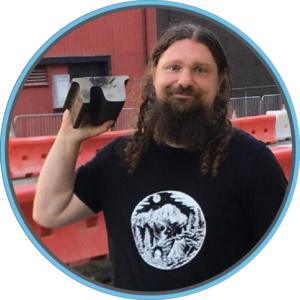 Doug is the President and Founder of TerraCrux Games. He is a man of many mysteries. 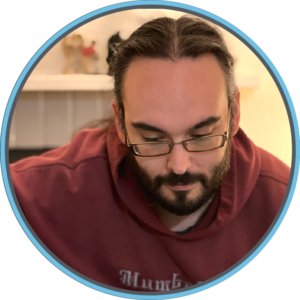 Originally from Humboldt County, a small part of northern California best known for its flora, Shan moved to Washington in no small part for better access to gaming spaces and other gamers. While he misses the forest moon of Endor that he left behind, Washington is now very much his home. His love of hobby originates from early games of Dungeons and Dragons and Magic: the Gathering. His interest in D&D grew into an enthusiasm for role playing games generally with Rifts and White Wolf titles. His interest in Magic: the Gathering focuses on the Commander format for which he has up to 8 decks at any given time. These days most of Shan’s gaming and hobbying revolves around Gaslands: Refueled. He comes in every Tuesday at 4PM to get his fill of vehicular mayhem and has no plan on hitting the brakes anytime soon!
Shan is also an enthusiast of works of horror and video games. He can talk far longer than one might want about the works of Stephen King, the World of Darkness setting, or the Fallout franchise. He has strong “Edition Wars” opinions when it comes to both Fallout and the World of Darkness but always keeps discussions friendly and good-natured.
And now you know Shan.

Matt is a recent California transplant from Orange County. Though he has lived here just shy of a year, he already feels like Washington is his new home. He is an avid board gamer, active tabletop RPG’er, novice war gamer, and fanatic TCG player who is excited to expand his love for hobby and grow the community with his enthusiasm.
At a young age Matt was introduced to strategy-based board games such as Risk, Othello, and Stratego. He also immersed himself in fantasy literature and media, reading his dad’s hard back copy of the Lord of the Rings trilogy in grade school and growing up watching weekly episodes for Star Trek: The Next Generation. This combination of interests set him on his path towards more in-depth board games such as – Scythe, BloodRage, Terraforming Mars, Kingdom Death: Monster, and Brass. It also opened the door to tabletop RPG. Matt has enjoyed playing in multiple campaigns over the last two decades.
Matt’s biggest and most consistent passion is Magic: The Gathering. Playing and collecting since the Rath cycle, he loves every aspect of the game. Limited formats are his home away from home. He enjoys the smell of cracking fresh packs, the challenge and strategy of deck-building, and most of all the thrill of playing the game itself!